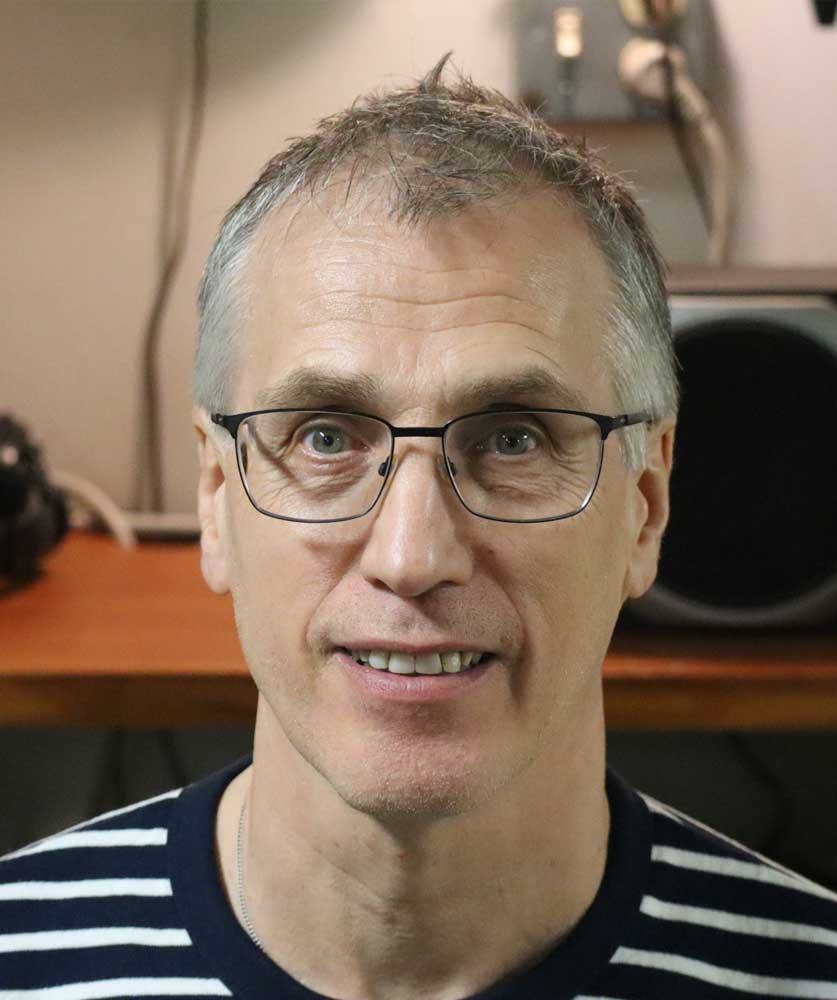 Back on the air after a long silence. Just changed callsign from KD2QIP to N2DH.

First licensed as G4BLQ back in 1972 when I was living in Market Drayton England at the tender age of 16.

Great friends with G3JPB and G8EWD. Would love to get news of how they are doing.

Catching up on over 30 years of Ham Radio history has been more difficult than I thought. It’s not the new electronics, that was the bread and butter of my professional career, no it’s the jargon and different operating procedures. The hobby seems to have become more of a vacation than a calling. Passion seems to persist in station operating through all the competition and contests but constructing seems to have slipped out of the mainstream. Most “technical” QSO’s seem to be on how to operate and understand the manual, less about construction more about politics. On the HF bands some of the Nets are intimidating and not as friendly as I remember. Even asking for a signal report can be met with language and attitude.

However, I have still managed a few memorable contacts and remain hopeful at getting some like-minded technical ham friends.

Currently Club Secretary, you can e-mail me at n2dh@wearc.org

I have kept my trusty FT-707, constructed a modern switch mode PSU for its shack 12V supply and purchased an MFJ-949 ATU. The antenna is an 80m end fed half wave. Works OK but crippled by the local RFI from countless devices and the local light rail system.  For VHF and UHF I have a couple of hand held radios, one can act as a UHF to VHF repeater and the other supports DMR.

I purchased a genuine mcHF QRP transceiver as a kit and was amazed how practicable it was to build a fully functional SDR with great performance that required no alignment! That has become my main portable station because I love to go camping with my motorcycle and take a HF station.

I have a good Scope, lab PSU various test equipment and soldering equipment. I have built several projects and plan more. All I need now is a good Spectrum Analyzer and Logic Analyzer!

This year’s projects include a HF 200W PA, 2m Transverter and upgrade my AREDN mesh network.

How did I get here?

Amateur Radio was a life changing experience for me. It shaped who I became and set me up for a fortunate life. My turning point was taking the courage to bicycle the 5 miles from my home to a then unknown person who had lots of antennas outside their house and was known locally as an eccentric radio ham. At the age of 14 and being a timid boy, this was quite the adventure. Back then I had no way of finding his phone number or even being allowed to use our one house phone. But I took that plunge, knocked on the door and introduced myself. I wish I could recall his reaction or how things unfolded, but its lost. I do remember it being a short meeting that was followed up by a visit to my parents. My new mentor Henry did the right thing and asked my parents if it was OK to be my friend and spend time with me. Back in 1970 concerns about child safety were more flexible, Henry was welcomed into the family, indeed my Mother later confided that they thought Henry might be able to get through to me because they could not.

Prior to this I was a curios boy who was always taking things apart, mending things and building all sorts of “devices”. At school I was capable, but unfocused and not interested in academic work. Indeed, my older sisters’ future husband, a schoolteacher, had confidently told the family I should become an electrician or car mechanic and should leave school at 16.

Henry was having none of that, he spent many evenings and weekends talking and explaining everything to me, he captured my interest and showed me how to get better at the things I wanted to do. Through his stewardship I not only passed the English RAE (Radio Amateurs Examination) but all my end of School Exams graduating high school in the top few of the year. This shocked my school, parents and probably explains why after 50 years I still have problems talking with my brother-in-law.

At 16 I got an aging Vespa Scooter, it had a terminal velocity of 45mph, would seize going down hills, but it made visiting Henry easier and also took me the 35 miles to a local government radio station where I passed my CW exam. So, on September 14th, 1972, aged 16, I became a Class A license Radio Ham with the callsign G4BLQ.

The adventure continued. Henry and I re-built his family home, renovated old tractors, cars, built an 80-foot tower complete with a three band Quad antenna, a Rhombic in the adjacent field and competed in field days. Not content, I developed a passion for RTTY and the mechanical Creed 7B teleprinter, then later the US Teletype 33.  My own shack was more modest, I started with a home build G2DAF designed transmitter with a WW2 HRO receiver, later replaced it with a Heathkit SB101 HF transceiver. For 2m and 4m it was always home built or more correctly home converted equipment. Mashing together the UK Pye and US Motorola used communications equipment. These were pre-repeater days and a mix of AM and FM.

By age 19 it was University, I took my 2m “rack” and had a 5/8 vertical on the dorm roof, but my days with Henny were coming to an end, after graduating collage and studying for my PhD there was less time for radio, but during the long summers I was licensed in France as F0HBV using my new FT-707 on HF to talk with Henry and few others back home. My last log entry was 9/7/1982 from deep in the south of France. The summer was over, and my professional career was starting. Just ten years of operating but it set me up for a rewarding career designing radio and electronics equipment of all types. But that is another story.

Fast forward to 11/7/2018 and my first HF call as KD2QIP, finally back on the air with that same FT-707! In semi-retirement now, lots of free time and a long list of things I want to explore and build. I still have a passion for home-brew and hands on, not quite the same desire to operate, just my luck the HF bands are at an all-time low.  I have my new shack and almost all the test equipment I need. Life has been good to me and its now time to give back some of that help to others. I’ve been a ‘Henry” to five others so far, not for Ham Radio, but as a Mentor and Roll Model. There would have been a sixth, but he died of an overdose, some things you just cannot fix. I think I have about another twenty years left in me; may the adventures keep coming. 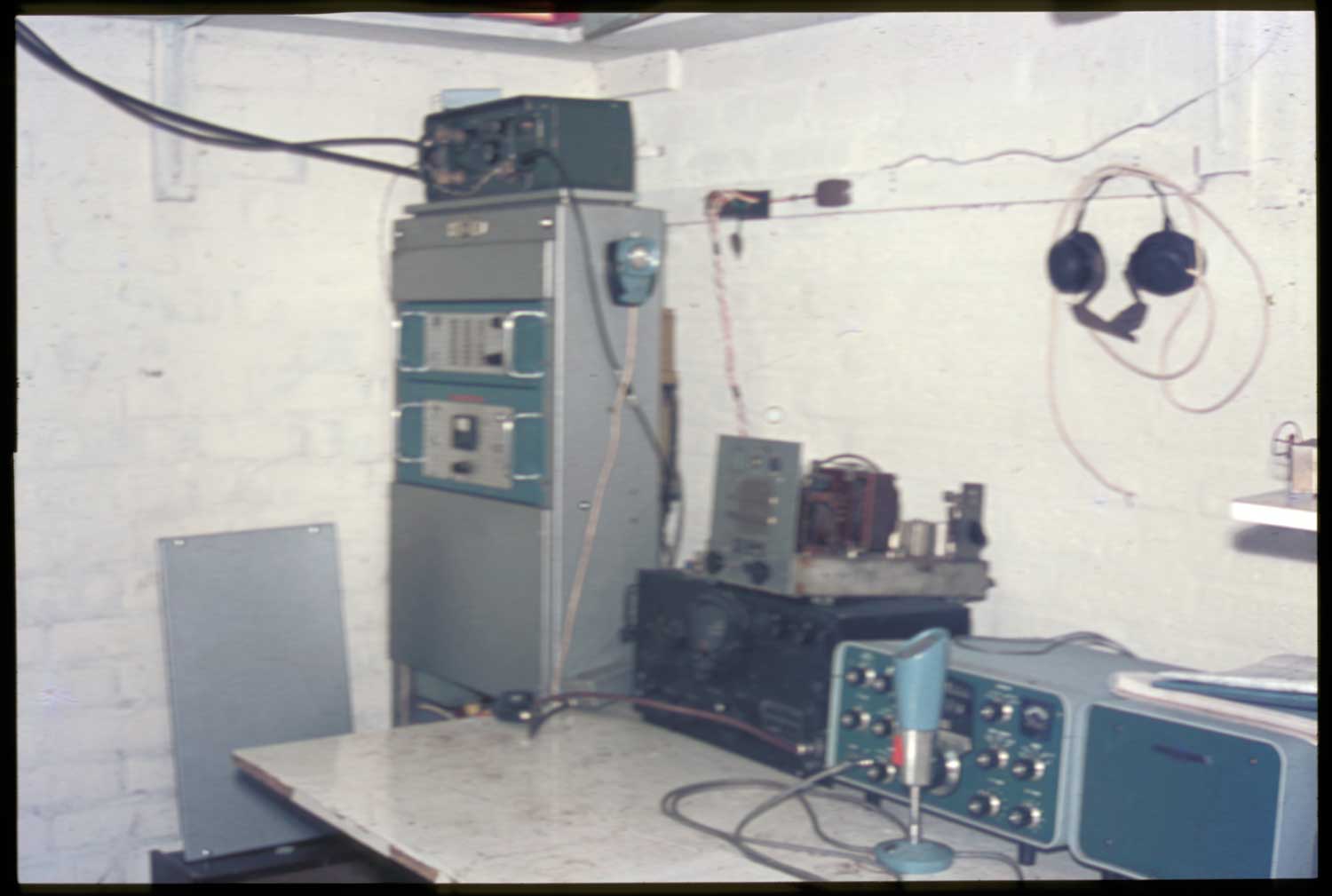 Back in my first shack, things were basic. Heated by a paraffin (kerosene) heater with limited power (240v at 10A max). I started with a home built G2DAF transmitter using TV line output valves (tubes) because I could not afford the real thing. The receiver was a modified HRO WW2 receiver and antenna change over was complicated. Only one picture survived, at the time of updating to a Heathkit SB101 transceiver.  The outside view shows the 2m and 4m beams and in the noise of the sky you can just see the long wire antenna.  I estimate being about 17 in my picture. 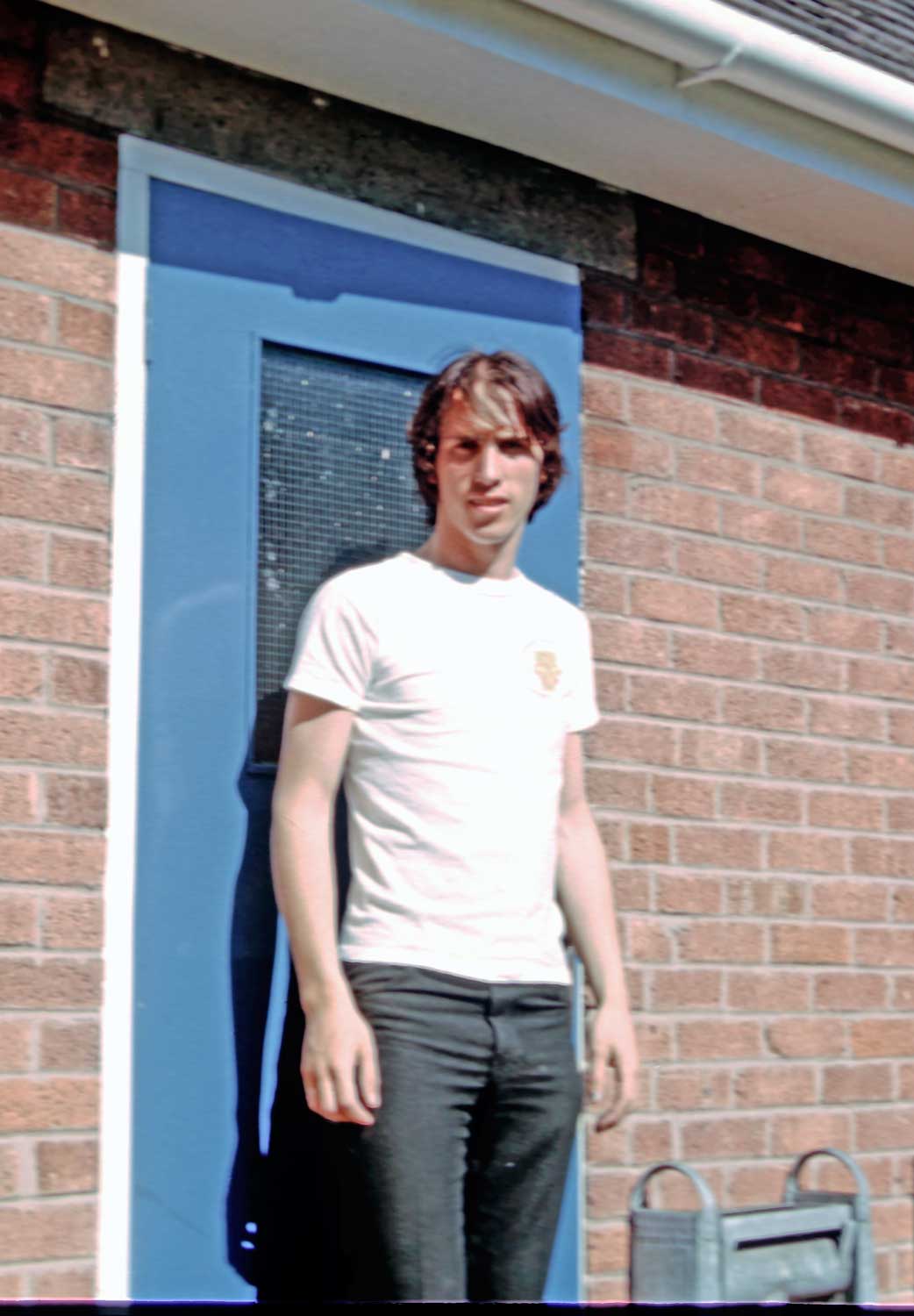 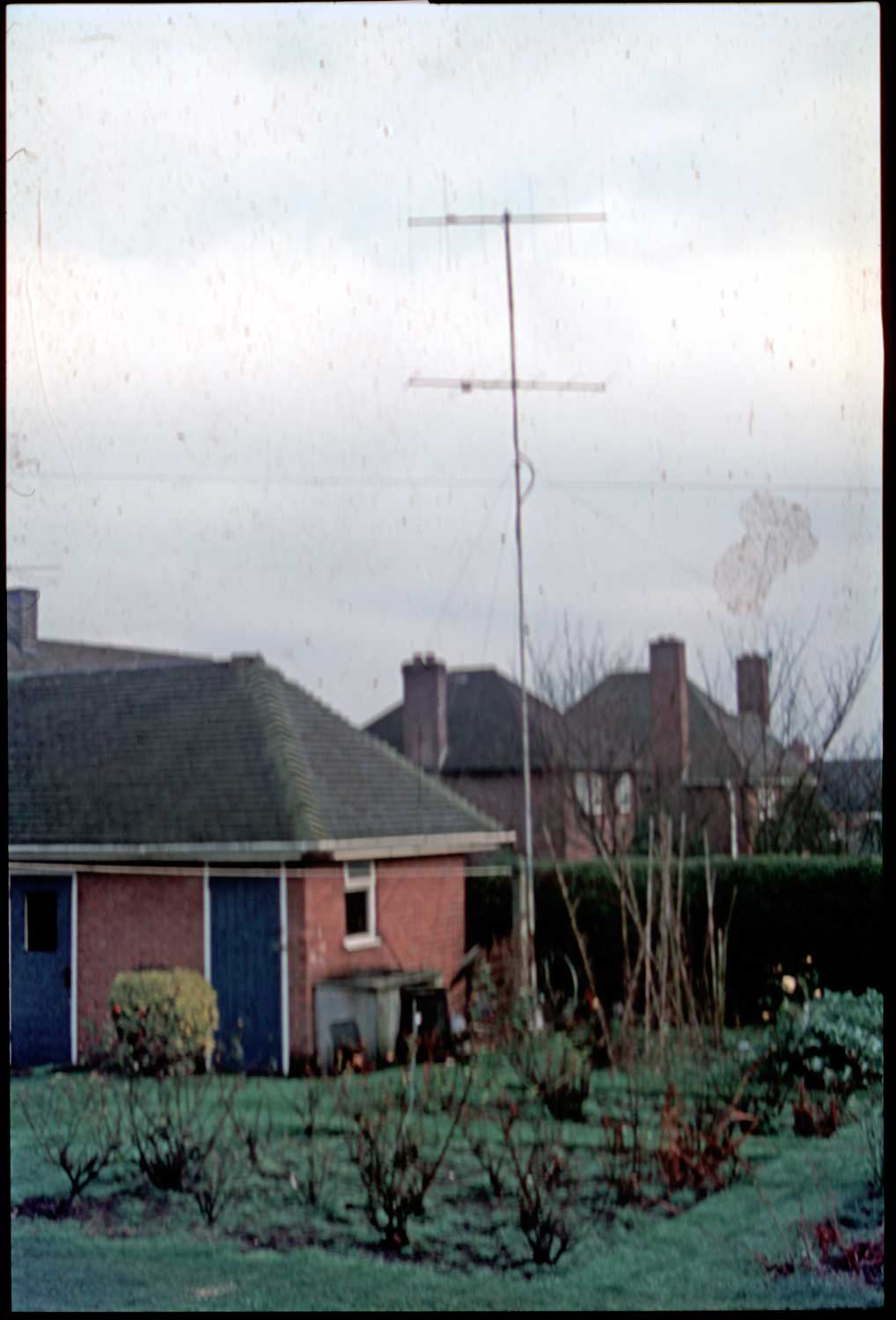 As described previously, Henry had a big influence on my development and subsequent life.  We have lost touch now; my Christmas cards don’t seem to get through and I have heard nothing since I last saw him in England sometime in 2011 or was it 2012? Least he got to meet my wife Jackie. When I last looked, Google Maps still showed the tower standing although the house looked a bit tied. There is a silver half-crown coin buried in that tower’s footings, my good-luck gift!

I have a couple of pictures of the place, the tower and his shack. I can still smell its odder, a mix of the damp walls and the oil from the transformers. I hope he is happy, probably unaware of the help he gave that 14y old child. Thank you Henry, you were more than a Father to me. 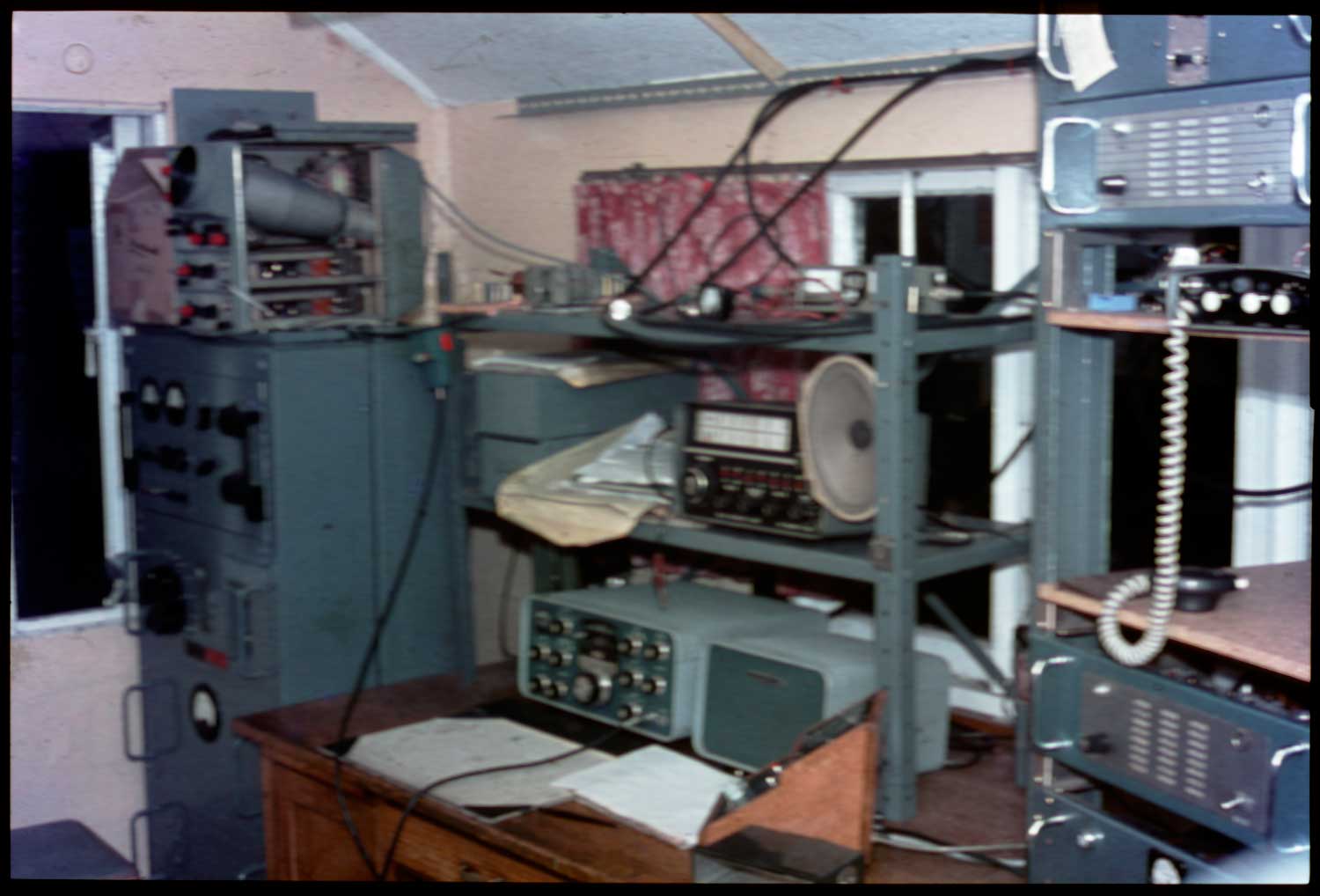 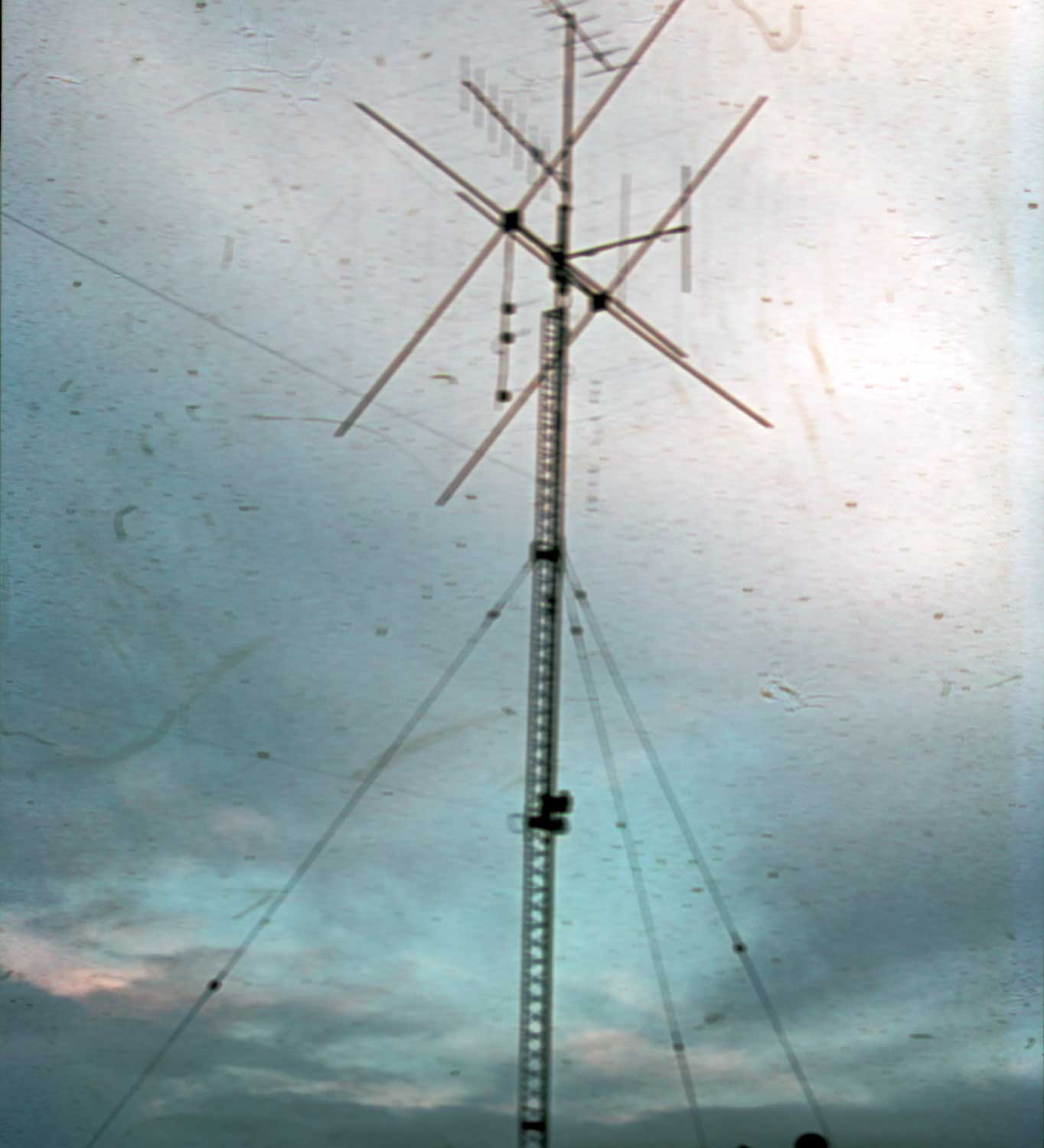