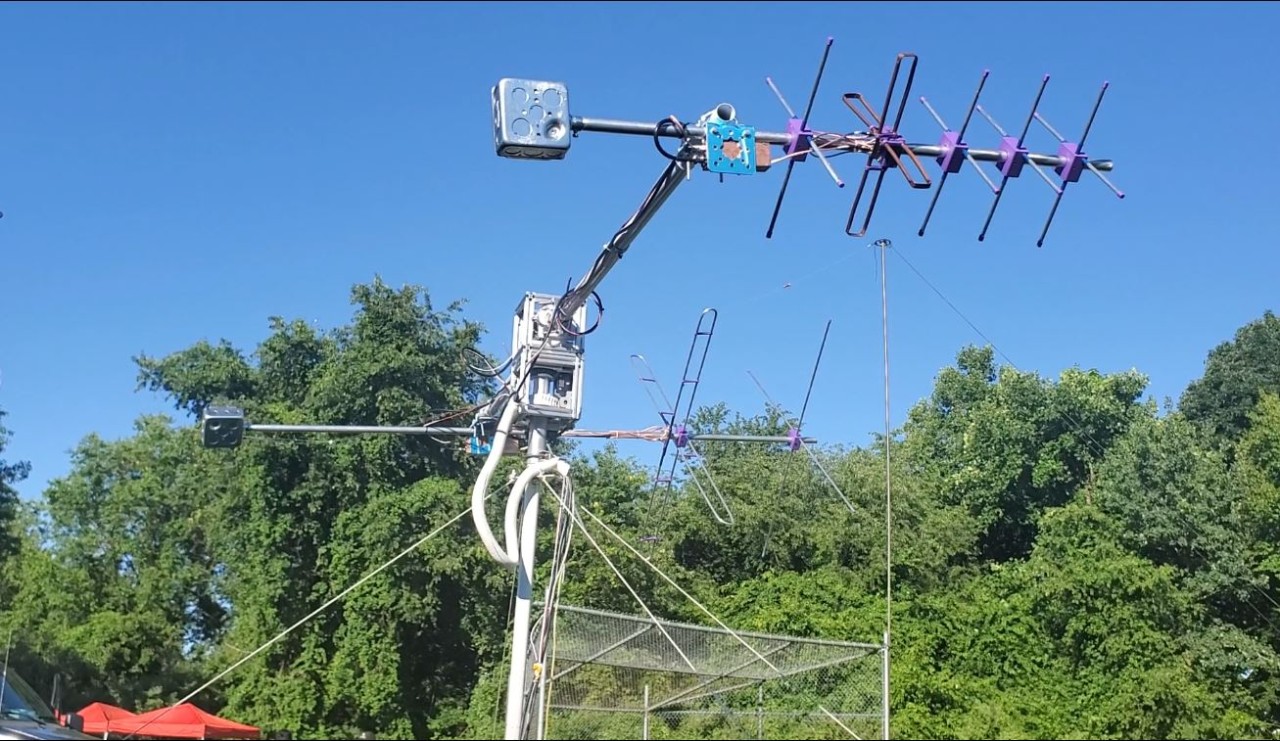 Our satellite tracker has finally come of age. It made its first public appearance during Field Day 2022.

After some last-minute upgrades, the project was considered deployable and set to work tracking satellites for real.

After a night research we were armed with a list of potential targets. The list was short, only 14 possible satellites and only three with FM transponders. The majority, and current trend is inverting linear transponders. When you take out paths that were not visible from the Field Day site and those that are unlikely to be active, we get down to about eight candidates including the ISS. It was a quiet day at the location, many of the normal satellites were too far south and the ISS would only make one short 6 min pass during the Saturday.

Prior to Field Day the tracker has only tracked the beacon with telemetry of one contact. There were still unanswered questions about how SSB worked on inverting linear transponders. It seemed like each transponder had a narrow band of frequencies and trended to use USB for the uplink and so LSB on the downlink. This meant setting the radio to use USB on transmit and LSB on receive, not your everyday setting so took some time to find out how to set up the FT991. I still do not know the process of calling CQ, given we have about 6 minutes of usable time, you make a call on the uplink then presumably have to tune around the downlink to hear any reply. There is no lock between RX and TX, with Doppler changes and the lack of a fixed offset in the tuning makes the normal known TX and RX frequencies unpredictable. I have to assume that operators use their clarifies to resolve signals hence the tuning the RX after a CQ. Same goes for responding to a CQ, you hear the downlink but don't have to time to process the necessary uplink frequencies and although the tracker software will correct for Doppler, it won't convert a newly tuned RX frequency into the corresponding uplink frequency.

The bottom line was that I did not expect to make a real contact, our best bet was the ISS and we only had one short chance.

We had a good day, we heard eight satellites, a pileup on the ISS a few SSB signals and several beacons. There is a slight possibility we had a reply through the ISS but for sure it is not a confirmed contact. The ISS was low in the sky and we seemed to have about 3 minutes of traffic. Not long to get things done.

We did confirm that USB is the preferred uplink and that contacts are understandably short, quick CQ, callsign and then reply.

This is what we heard:

This might not seem like a lot, but it was great practice and shown how critical it is to be able to have the radio set up for the pass and get experience tuning in SSB quickly when Doppler is being adjusted.

I think it is critical to have a duplex TX/RX, being able to listen to the downlink as you transmit will eliminate many of the concerns tuning in the RX. With a duplex setup you should be able to monitor the transmission and get the RX ready on the correct frequency as you switch to RX. It will also alert you to another station using the same frequency. Duplex can be achieved using two radios or a SDR system.

Also having an automated way of calculating uplink and downlink frequencies as needed would make listening and replying to stations more effective. We will look into either obtaining or developing such capabilities.

If there is interest, we can go out again and set things up. If one or more members is interested, then we can schedule a trip. We will need an open space where much of the horizon is visible without obstruction and some place we can put the mounting pole in the ground and attach the four guy ropes. Alternatively, if someone has a towing hitch adapter, we could work from a parking lot.