Starting a New Life for the Clubs Donated IC-701

Long before I joined the club a couple of years ago, a club member, now a silent key, donated his IC-701. He was Harold K2IBM an active member who recently went silent key. Since we have been getting some new club members there is a need for a "loner HF station" so a new member who has not yet invested in a rig can get on the air. In the past these members would have used the Club Station, but we are still in semi-lock-down because of COVID-19. Don K2DEG and a few other club members managed to get into the Club Room and retrieve some items, the IC-701 and an Antenna Tuner were part of that raid.

These parts were passed to me for a look over and check if everything was working. This Blog is my first switch on and test. You get to see me thrash about powering it up safely, learning how to operate it on receive and transmit.

This Icon radio was manufactured in japan somewhere between 1978-1979. Apparently (Google search) the IC-701 was built when Icom was just entering the US amateur market and this was their Flagship HF radio.

Part One "The Switch On"

This next video shows me testing the power output using a set of attenuators and a true RMS power meter. The test shows that on 14MHz. the unit produced just under 100Watts of power. The actual results had a attenuator of -55dB between the TX output and RMS power meter. The meter showed a -5.2dBm level so after the maths we have a recorded output of 49.8dBm. Since 50dBm is 100Watts, we did pass test by producing 100W of power.

We now use the Spectrum Analyzer to double check our power measurement and also measure the 2nd and 3rd harmonics. This test validated the previous power measurement and that my cheap RF power meter worked accurately. It also showed the IC-701 had 2nd harmonics at -60dB and 3rd at -68dB. The spec sheet states a Spurious Emissions of less that -60dB so, by my measurement a just pass result.

This was the plot of the Harmonic measurment. 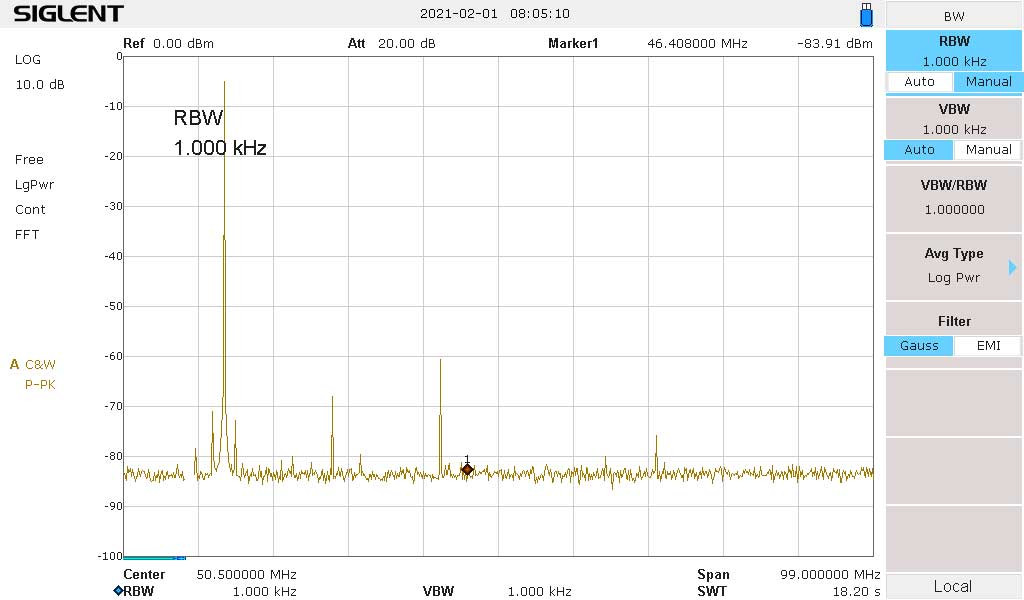 The video of me taking the measurement can be seen below.

I spent some time with the receiver and concluded it was sometimes sensitive but most of the time just a deaf noisy receiver. I tested it using a signal generator providing -60dBm which gave a consistent S5 on my two radios. However I screwed up the recording of that video. We pick up the story again with the radio under test and working as well as I have been able to make it...

See the RX testing video below.

So, there you have it. This is the end of this first Blog. You have seen that the Club loaner HF station is a bit deaf right now and what I think is wrong with it. The next blog will be me taking it apart, repairing the switch and, with luck, making it work again. Until then 73's from me.