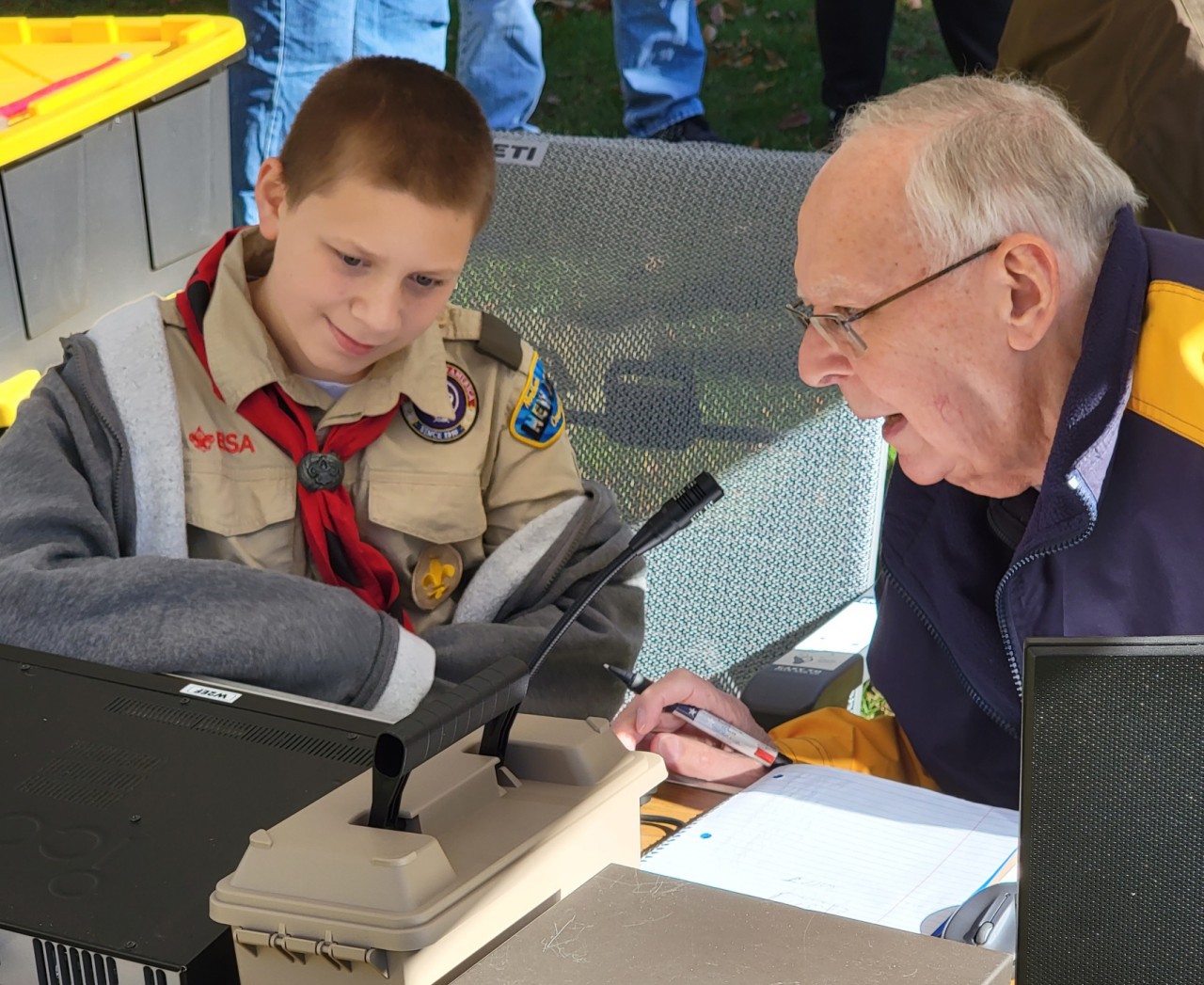 I am shocked and sad to have to report that Don, our club president, has joined the silent keys on the other side of the DX. Don passed on 26th December 2022 from complications recovering from COVID.

None of us anticipated losing Don so suddenly and I am sure many of us would have wanted to share the New Year with him, all of us will miss his wisdom, experience and humor that helped keep our club together.

Don was first licensed at the age of 15 as a Novice in 1953 (KN2DEG) in Montclair, NJ. There was an article about him in the local paper. He went on to get General, Advanced and finally Extra Class licenses, He was also very proficient at CW having been an instructor during his military service as a sergeant in the Army National Guard for eight years.

Don was married to Marilyn for over 61 years, had two children and was a proud grandfather. Professionally he worked as a CPA and founded his own firm with a couple of partners in Fairfield, NJ finally retiring after enjoying 50 years with the firm. He also enjoyed playing the banjo, singing, collecting antique broadcast radios, and cooking.

Don had been a Ham for 69 years, a significant achievement. A member of the ARRL he was awarded the DX World Award in 2018, a life member of Ten Ten International (#1239) where he always took part in their contests. He wanted to pass down his Ham Radio experience, bringing his grandchildren to all the club events and getting them talking on the air.

We will always remember Don as a strong member of our club and it is fitting to see him pictured at our last club event, Grover Cleveland where he was passionately helping a young cub scout operate on air. 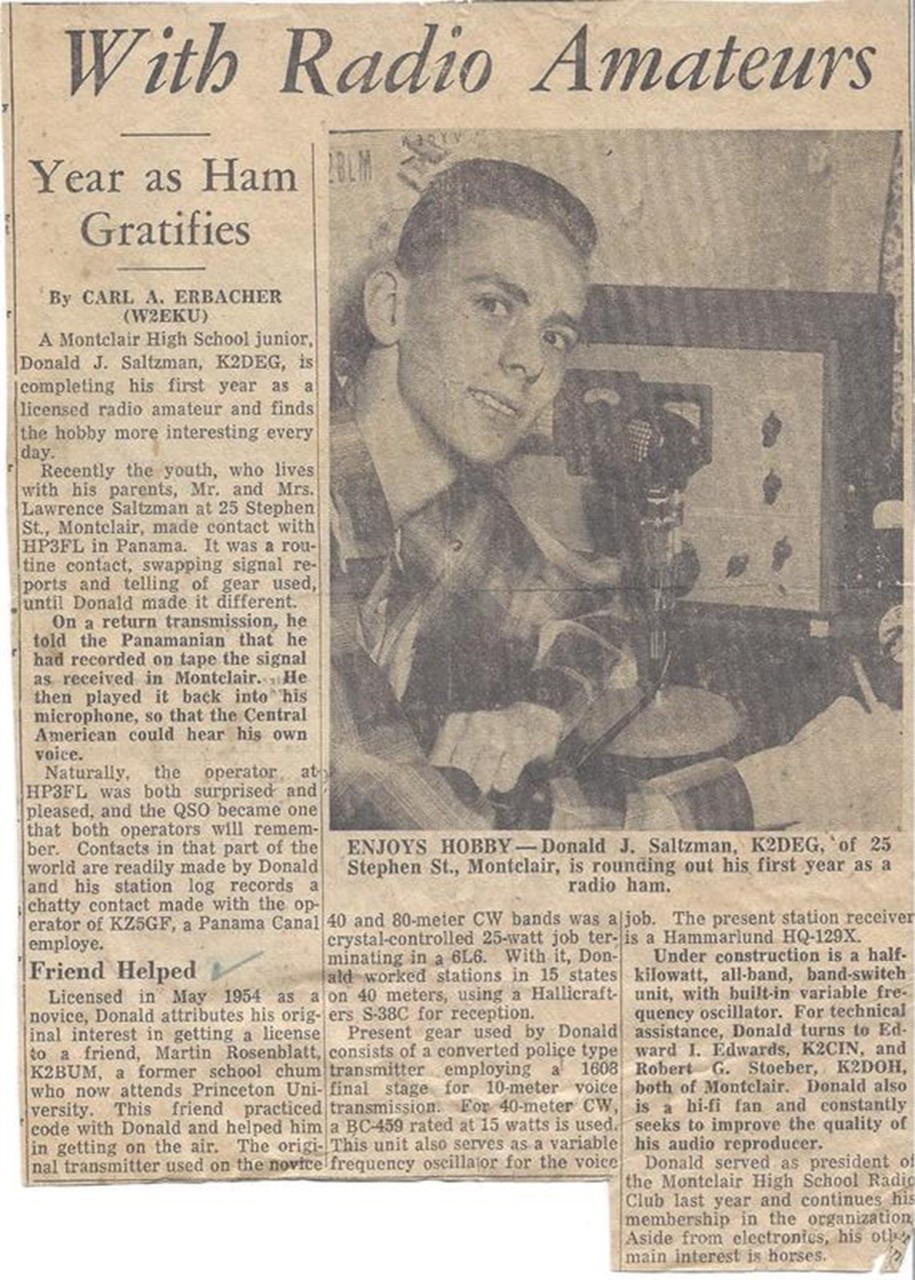 Some words from our members...

Don was a great guy as well as a leader. When WEARC's president, John, N2NO, passed away suddenly, Don stepped in and took his role. He helped the club move forward with club projects such as the satellite project and supporting the DMR switch. He was also a big help with VE sessions.

When COVID hit, we were no longer able to host our VE sessions at the Essex Fells building. Don, came up with the idea of asking his former company to allow us to use the covered driveway under their building for the sessions. This allowed us to start out "Stay in your car" VE sessions to get through COVID. These sessions were very successful, not only in helping to get operators licensed, but also adding members to the club.

Don was a big supporter of club social gatherings. Under his watch, the ROMEO (Retired Old Men Eating Out) group was started. Whomever would be available would gather for breakfast on a Thursday morning at one of the local diners. Due to my job, I was never able to join one of the breakfasts.

Don also supported an occasional diner gathering which was held at Don Pepe's restaurant. Don's one rule about the gathering was we had to order plenty of red sangria. These diners were attended by many of the members and some of their spouses. They were always a great time.

Don was a great operator. He would help on Field Day by working CW, gathering double points. He would be there to help with any special event, including our Grover Cleveland event. He will truly be missed.

I will remember his smile, his upbeat voice, his jokes, and his stories.

I will miss him at our Thursday morning breakfasts.

Don held the WEARC club together, keping us organized.

He was always willing to help another HAM with a problem if he could or would know someone who might be able to help.

He will be truly missed.

It's had to put a date on when I first met Don but I believe it was 2017 at a WEARC meeting. The regulars told me about a well-dressed guy (rare for hams) who showed up to the previous meeting and they hoped he would return.

Don and I gravitated toward each other because of our business backgrounds. We tended to have a similar approach to club events and managing projects. The club president at the time took ill and had to vacate the position. When it came time to select a replacement, we all took a step back while Don took a step forward and thus became our new president. Don stepped in easily, and smoothly began leading the club. He is a natural at leadership.

Around this time, a group of us had decided to start a weekly breakfast club. We enjoyed discussions over breakfast with topics ranging from electronics, careers, growing up, and yes even politics. Don and I may not have always agreed but he was willing to hear the opposing view if you had facts. When either one of us could bring enough evidence to bear, the other conceded.

Don's adroit leadership kept us steadily moving forward with successful field trips to the battleship NJ, ARRL headquarters, Grover Cleveland, and a series of annual Field days with high point scores. He was always willing to do anything that he asked others to do.

Don spearheaded remodeling the club station and rewiring the antenna feed lines. Don was actively working on getting us a new and improved meeting place, post covid.

The club breakfasts have special importance to me. I've learned many things about my fellow hams (ROMEOS) or Retired Old Men Eating Out that has provided enjoyment and respect for their amazing experience and talents. Many times Don and I would be the last ones left at the restaurant leading to one on one discussions.

Don and I shared a strong bond having learned that our career paths had intertwined over the last 40 years. My accountant in 1983 was actually Dons partner. Don validated my bad experiences with the guy and the reason he was no longer at Don's firm. We discovered that we had several clients and associates in common during our careers. Had I known Don at that time it might have made a significant improvement for my firm over the years. We always had a great time reminiscing and comparing notes.

I enjoyed working with him. I enjoyed his warmth and friendship. I am going to miss him greatly.

My first introduction to Don and the members of WEARC came about just prior to the 2022 Ham Radio Field Day. Previously, I had attended the club's weekly meetings on-line and was anxious to meet some of the members in person.

Over one's lifetime you may personally meet and remember, I would guess, more that 1500-2000 people if not more. Some of these meetings fly right by and others remain with you as you work to establish long term friendships (and relationships). Such was my initial meeting with Don. A warm, firm handshake and direct eye contact from a fellow who had an e-mail address of 'otmusic@ ….net' was what I needed and received at that point in time.

Don and I shared an interest in music as well as ham radio, sharing many memorable moments focusing on the NY Paramount Theatre and the Theatre District going back over 40-50 years if not more. Although our friendship was all too brief, I feel that I have known Don much longer – more like the 50 years when we treaded the same turf in Times Square.

A man of impeccable warmth, honesty and wit, Don will be dearly missed and most certainly remembered.

My sincere condolences to the Saltzman Family and to my fellow members of WEARC.

May Don rest in eternal peace.

Don became club president about the time I joined the club in 2019. He helped me adjust to being a good member helping me deal with some comments and issues. During the many unofficial club breakfasts I got to know Don better, learn that he helped many members behind the scenes as well as hear his stories of his early life: like running a teenage business showing movie films, endless trips into the city to buy surplus radio parts.

Don was an inspiration to the club, will be a difficult president to replace but whatever happens I hope his desire to keep the club alive and to attract younger members will survive.

We missed our Holiday Club Dinner this year, perhaps at next years dinner we can take a moment to remember Don and show him we continued as WEARC.

While I have not known Don long, as I became more active in WEARC I began to interact with him more consistently and he was always up for a conversation.

In my short time with the club my most cherished memory is from Grover Cleveland day, which he was quite fond of. Don truly enjoyed teaching and talking about amateur radio with the younger people. Don took a lot of time talking radio and CW. He worked with numerous scouts that day and it was east to see the joy on his face. That's what I'll remember most.

Don will truly be missed, he was an inspiration.